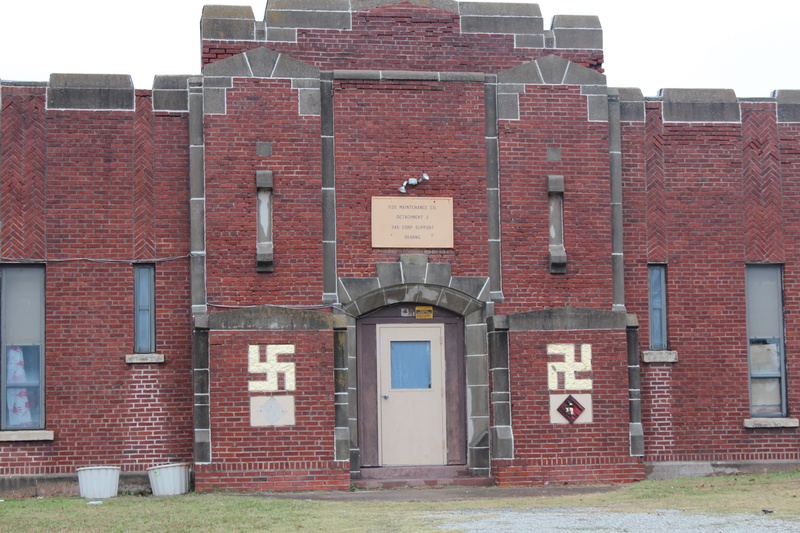 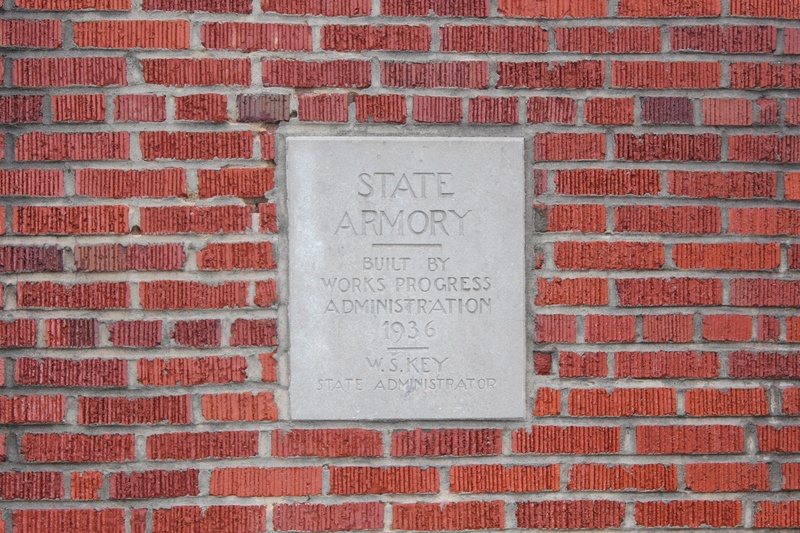 WPA Plaque on the Armory

Our first stop in Konawa, Oklahoma landed us straight in front of a big beautiful red brick building.  This was the Konawa Armory. This building is not mentioned in the Guide.

Immediately apparent when approaching the front door are two giant swastikas set in concrete.  While shocking at first sight, the backwards swastika is actually a Native American symbol called the “thunderbird.”  This structure was completed in 1936 in preparation for the National Guard’s future involvement in WWII.  The Armory was built by a host of recently unemployed oil workers in an attempt to stimulate the local economy.

It is a giant red brick, single story building that encompasses somewhere along the lines of 15000 sq ft.  After further inspection it became apparent that the building is not in current use.  Based on the amount of junk left in the large room to the rear of the structure and construction materials laying around it is possible that the building is under some sort of renovation.  The original architect and builder remain unknown. 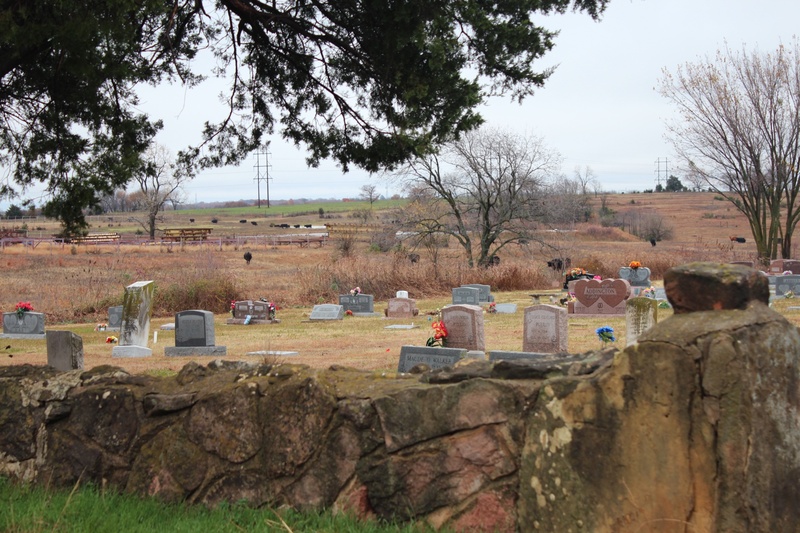 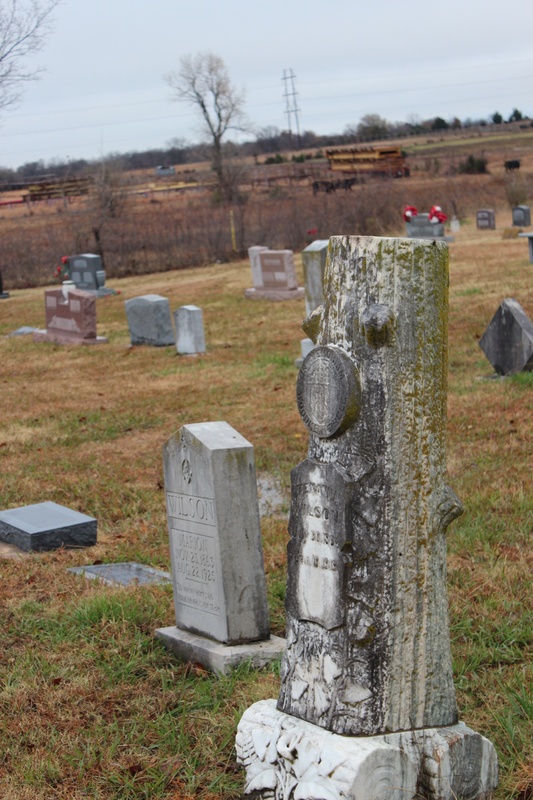 On the west side of Highway 39 south of Konawa stands the city cemetery.  Surrounding the property is a wall that is suspicious of 1930’s WPA architecture.  The cemetery seems to be well maintained and provides an excellent view of the countryside where we saw sheepdogs herding for farmers and ranchers.

Many of the tombstones final resting dates are from the early 1900’s.  They are beautiful and made of aged stone giving this place a particularly eerie feeling, even by cemetery standards.  Standing on the southeast side of the cemetery is a gravestone shrouded in mystery.  Many people travel for miles to come visit the burial site of Katherine Ann Cross, a girl rumored to have been eaten by wolves.  On her tombstone it is written “Murdered by Human Wolves,” possibly referring to the botched abortion that ultimately led to her death.  There are many ghost stories and legends surrounding her death that make her grave a unique addition to the updated Seminole to Ada WPA tour.

Although the cemetery existed in 1941, it was not included in the guide.

"Right from Konawa on a gravel road, 4 m.; R. on an improved dirt road is ST. MARY'S ACADEMY, 6 m., a convent school for Indian girls. Founded in 1884 by four Sisters of Mercy from Illinois, who came at the invitatoin of Benedictine Fathers to teach white and Indian girls in day and boarding school, it has received strudents from practically all of the Five Tribes and from many of the Plains tribes. Enrollment (1941) is 110.

Established in 1876 by Father Isidore Robot, of the Benedictine Order, SACRED HEART MISSION, which sponsored St. Mary's Acadmy, occupied a tract of 640 acres in this locality given by Potawatomi and Shawnee tribes (see Tour 5). The Abbey, a two-story building surmouted by a cross, is still in  use, as are the stables, a bakery, and other utlity structures now (1941) under the care of St. Gregory's College at Shawnee." 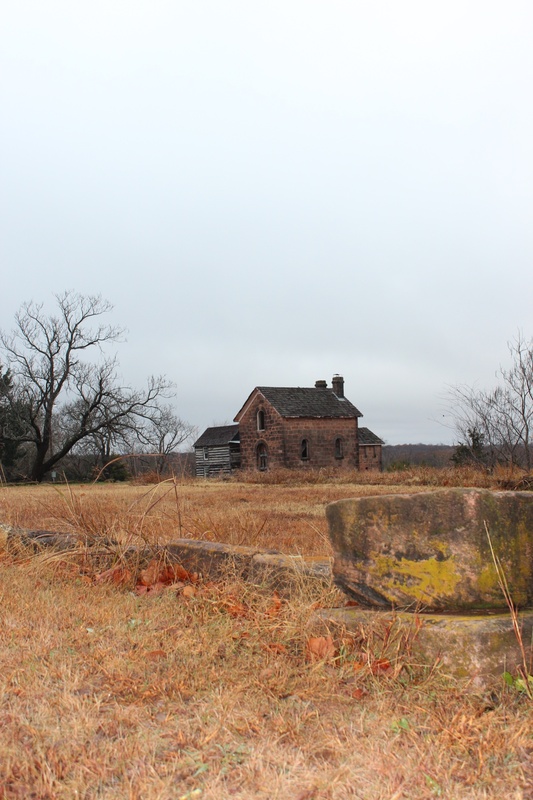 The old bakery wall at the Mission 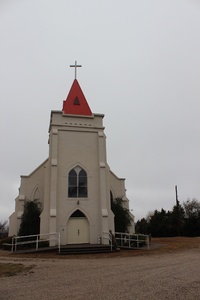 The front of the Misson chapel 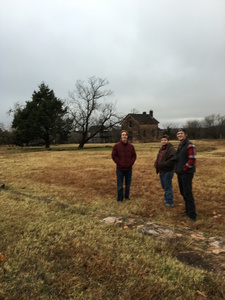 Our group on the Mission grounds 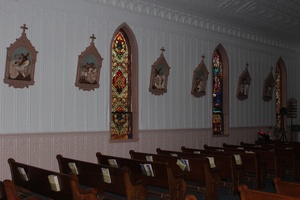 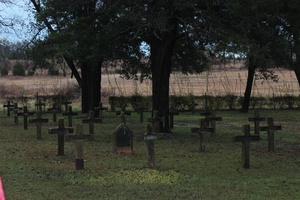 Just down the road to the south of the Konawa Cemetery stand the remains of the Branch School of the Sacred Heart Mission.  Originally founded 1876 by Father Isadore Robot, this mission was intended to house and educate Chickasaw and Choctaw freedmen after the Civil War.  It was built with the help of the local Indians who assembled large log buildings that were eventually replaced by frame buildings.  Eventually, the mission added on a convent where four Sisters of Charity from Illinois took upon the task of setting up a boarding school for orphans.

The Bakery was built in September of 1883 and it is one of only two buildings still standing today. A small portion of the wall made of stone built around the bakery is still standing as well. In 1901 a fire broke out destroying some structures on the grounds.  Several new structures were built to replace the old, one being a new brick monastery.  But unfortunately, by 1957 the brick monastery was demolished “due to the alarming rate of destruction at the hands of vandals.”

At the recommendation of the state, the college at the Sacred Heart Mission was moved to a more populated area near Shawnee. It was renamed St. Gregory’s University and still goes by the same name today. By 1983, The US Department of Interior declared the mission a part of the National Register of Historic places. Currently the Sacred Heart Mission is still seeking funds to rebuild much of its structures.

As soon as we arrived at the mission we were asked if we were looking for the grave of Katherine Ann Cross.  Apparently many superstitious people and ghost hunters often mistake the Sacred Heart Mission for the grave of Ms. Cross who is buried just up the road.  After realizing we were students doing research on the mission, the priest was very helpful and directed us toward the original structures still standing just up the road. The buildings that still remain are no longer in use for anything but tourism.

Next to the remaining two structures is the mission cemetery that is said to be haunted.  Some people claim that this cemetery is haunted by the dead monks and priests of the past which could be another reason why so many thrill seekers find their way to the mission. Unfortunately, we experienced no paranormal activity.

Click on the images below to read more about the Sacred Heart Mission and Branch school. 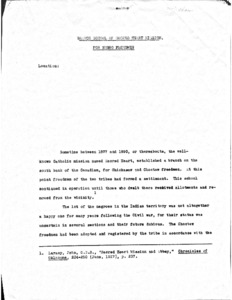 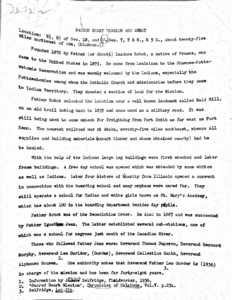 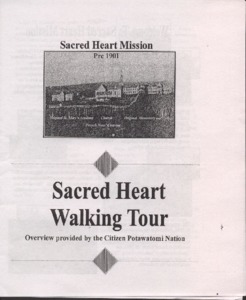